No slowdown in global temperature rise?

There has been much recently published about why, compared to the 1980s and 1990s, there has been a slowdown (or even a "pause" or "hiatus") in global warming. Burial of heat below the surface of the ocean has been fruitfully investigated. At the same time, commentary has pointed out
Now Karl et al. in Science have declared the non-existence of a slowdown, after reassessing observational data.

They are right to make scrutiny of the observations part of the search to understand any (apparent) hiatus. Global warming is important for us in the long run, but is a subtle change to estimate over a single decade (~0.1°C global change). Part of the challenge is the variability of nature year to year, region to region. The other aspect is ensuring consistency across the changing mix of measurements that go into constructing a long-term dataset.

The major component of their re-appraisal is a revised estimate of the global sea surface temperature (SST) trend upwards to about 0.08°C between 1998 and 2012 (from about 0.01°C in IPCC). This revision comes from changing the assumptions about the relative biases between and the relative weight it is appropriate to give to drifting buoys and ships. This revision amounts to 1/200th °C/year.

When talking about a revision of temperatures that is so subtle, it is prudent to be cautious. Karl et al. recognise this in the title of their paper "Possible artifacts of data biases in the recent global surface warming hiatus" (my emphasis).

How can we gain more confidence about the recent global sea surface temperature changes? SST CCI's contribution is to develop a high stability, independent dataset of SST. We attempt this using satellite-derived SSTs, based on physics (not tuning to drifting buoys or other in situ observations).  If we see compatible behaviour in independent datasets, that behaviour is unlikely to be driven by data artefacts.

Compared to an in situ data set, we in SST CCI have fewer instruments whose long-term calibration we need to worry about. On the other hand, the satellite measurement, being from space, is indirect, through the atmosphere; we go to considerable lengths to remove any residual atmospheric artefact in the SST time series.

Karl et al.'s "new" value of SST change over this interval therefore fits pretty well with our independent [3] satellite data. These data featured in IPCC AR5. (They also agree well with the Hadley Centre in situ ensemble in the same figure.)

So, how new Karl et al.'s result is depends on what data you previously paid attention to.

In SST CCI we also have higher resolution data from blending in more types of satellite data, which, over 1998 to 2010 [4], has the same global mean SST trend of 0.06°C/decade. Patterns of warming tend to be more interesting that global mean numbers, and are related to the dynamics of heat uptake by the ocean. We need to understand how energy gets distributed around the climate system in order to understand decade-to-decade variations in global warming rates. 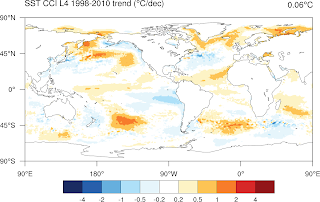 Notes:
1. The last ATSR failed in March 2012, so the period is not quite the full 1998 to 2012 interval.
2. The best uncertainty estimate that we can provide is that we have 95% confidence that the trend is between 0.04 to 0.085°C/decade. This is the trend uncertainty from the stability of the observations. We can only be confident that this trend uncertainty is valid in tropical regions, because the excellent global tropical moored buoy array is the only in situ reference we can compare with over that period where the thermometers are accurately pre- and post- calibrated. The fall-behind in maintenance of the array was very unhelpful, as it undermines this sort of long-term stability assessment for the whole satellite SST constellation, which has implications for knowledge of climate globally.
3. I think it is important that in situ and satellite observationalists try to preserve this independence by not letting too much understanding of each other's biases leak between the in-situ-only versus satellite-only datasets. But we also need to work together on getting the best possible reconstructions of SST using blends of in situ and satellite SST. Tricky when we are the same people!
4. The ongoing phase of SST CCI aims to extend this SST analysis to cover 1981 to 2016, over the next 2 years. But for now, it ends with 2010.
5. Thanks to Owen Embury and Simone Morak for help in putting this post together.