A paper by Hausfather et al used the experimental v1.2 SST CCI / NCEO dataset to assess the representation of the recent decades of ocean warming. The work confirms in useful detail the comment in a previous post that the version change of NOAA's long-term blended SST product last year does seem to reconcile their results with what we are getting in the satellite record.

The v2.0 SST CCI data, which we will release this year (2017), will be even more relevant to this sort of assessment, being more independent of in situ data than v1.2 and covering a longer time interval.
Posted by Chris Merchant at 02:20 No comments:

Over the last two days, I have been in a technical workshop with a range of contributors to the Global Drifter Program. Drifters are deployed around the ocean, and most measure sea surface temperature (SST), surface atmospheric pressure and (via their changing position) the speed of ocean currents. The data are transmitted back, mostly hourly, and shared around the meteorological and oceanographic centres as inputs to forecasts of the weather and ocean conditions. There are around 1400 drifters working in this way around the world as I write (see below).
This in situ system is highly complementary to the satellite system, and both are needed to meet the needs of meteorology and understanding of climate. One of the presentations at the workshop was by chief of a group in NOAA that generates near-real time SST products, by empirically correlating radiances from meteorological satellites at drifter SST locations with the drifter SST measurements. This is a very effective means of using satellite data effectively and rapidly to interpolate the drifter SSTs spatially, capturing the fronts, eddies and structures across the global oceans that can't be deduced from ~1400 point measurements.

We had the chance to see the Scripps Institute of Oceanography's lab for assembling their drifters, and learned a lot about the detailed thinking and experimentation that goes into creating drifters that can operate in the harsh environment of the ocean. Tiny design decisions are crucial to the success of their deployment.

In SST CCI, we don't try to blend satellite and drifter data. Instead, we treat the satellite and drifter array as two independent systems that can tell us about marine climate change. If the measurements made by two completely different technologies (remote sensing and in-water thermistors) tell us the same story of change then this greatly increases our confidence that we have accurately quantified the changing marine environment.

That is the importance of our figure in the last assessment report of IPCC, below.


Perfect agreement is not expected, since all measurement systems have some level of uncertainty. Nonetheless, it is clear that these independent datasets agree closely about a lot of the year-to-year changes in the overall temperature of the oceans, and about the general rate of change.

The satellite-based curve has been updated within the current SST CCI project, and we are still working on further extension back in time. A previous blog discussed how, last year, some of the US datasets blending various data sources were revised in a manner that brought them into closer agreement with these results, obtained a few years earlier.

The discussions in the workshop over the past two days have been very informative. We 'satellite folks' learned a lot about nature of the drifter array from the manufacturers and deployers of the drifters.  This will greatly help us when we use drifters to validate the uncertainties we attach to satellite SST data, for example. Turning the raw data from either system into a curve describing global change is tricky task. We all now appreciate better the challenges faced when extracting useful information, needed by society, from both satellite and in situ systems.

Thanks to Luca Centurioni and Lance Braash for hosting us all and showing us around -- and to all the manufacturers of drifters who gave their time to explain their work and listen to how the satellite community use their data.
Posted by Chris Merchant at 07:50 No comments:

For SST folks, 2015 was an interesting year. There was the flurry around a certain paper in Science and of course the emergence of a major El Nino event. In SST CCI, the focus is to do a careful job on historical records. But, with some support from the National Centre for Earth Observation, Owen Embury has done a quick and rough (for us!) look at the SST record up to 2015. This builds on our recent experimental reprocessing, but brings the record more up to date by using some short cuts. (These will be superseded by the culmination of the SST CCI project, so these results are provisional, and just posted for interest.)

First, the global average sea surface temperature change over time since 1991, as shown below:

We see 2015 as the warmest year for SST, with a marked increase since 2012. A similar sharp rise was seen in 1997/8, which was also the result of a major El Nino event. As then, it is likely that the global SST will drop down again during 2016 to temperatures more typical of recent years.

The warm water associated with the El Nino event is obvious right across the equatorial Pacific in the map for December 2015, corresponding to the last point on the time series above:

We have the recent El Nino as being the record event in the classic El Nino "3.4 region" -- although the margin compared to the 1997/8 event is close enough that we won't be confident of its record-holding status until we have done the proper job on SST CCI reprocessing:

In contrast, the anomaly in the "4 region" is clearly stronger in our data than for the earlier event, indicating that the hot action was located further west than in 1997/8.

On a final note, it is a pity that the next dual-view instrument, Sea and Land Surface Temperature Radiometer (SLSTR), missed the action of 2015, but in the project we are all very pleased that it has successfully been launched. Looking forward to working on the data.
Posted by Chris Merchant at 11:18 No comments:

Elevated temperatures from use of seawater as coolant by large coastal installations can be seen in high resolution thermal imagery. 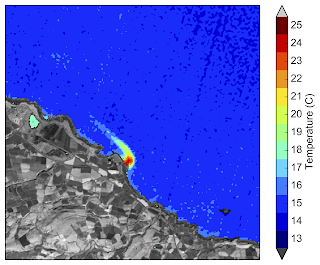 Note that the SSTs in this image are not quantitatively correct. The image is based on LandSat8 and the thermal channels unfortunately have calibration issues that prevent quantitative water surface temperature determination. However, it is interesting to look qualitatively at the data, since it is at ~100 m resolution the in infrared bands, and resolves features like this that are not seen in 1 km data typically used for SST.

EDF UK are offering a student summer paid internship for a project working with me to scope the potential in principal for thermal remote sensing at high resolution to help in monitoring and understanding the physical and ecological impacts of coolant plumes from power stations around the UK.

It would be excellent to have well calibrated multi-channel thermal resolution observations at ~100 m scale resolution for applications like this and also remote sensing of lakes. It is good that there is interest around Europe in extending the capabilities of future Sentinel 2 missions in this direction.

Image credit: Shaun Lee, University of Reading. (Thanks, Shaun.)
Posted by Chris Merchant at 06:47 No comments:

ESA have released this short interview about sea surface temperature and why it is a variable that it is essential to measured in order to understand and monitor climate.

There is also a re-run of the Massive Online Open Course on "Climate from Space" in which I feature, again talking about SST and climate.
Posted by Chris Merchant at 07:05 No comments:


Making improvements is an iterative process, where we introduce innovations progressively and validate they have positive impact. The team is currently assessing our most recent large-scale reprocessing, for which the new smooth-atmosphere algorithms have been used, along with other minor changes (e.g., to the prior assumptions used in optimal estimation).

The summary is that the stability of the AVHRR data streams is clearly improved, both with respect to the calibration anomalies on some instruments and sensitivity to desert dust outbreaks over the ocean.

Being experimental, we are not promoting use of this version of the data, but it can be shared with any interested researchers.

The next experiment reprocessing run will attempt to derive SSTs for the 1980s using our system, for the first time. It is due around the end of this year.
Posted by Chris Merchant at 00:44 No comments:

Why worry about all sources of errors?

There are many effects that act as sources of errors in a climate data record. No measured value is perfect, whether taken in the laboratory or inferred from radiances measured in low Earth orbit.

The most obvious characteristic to establish about a source of error is the magnitude of its effect. The (standard) uncertainty is a measure of the typical size of errors, and is generally what is represented by "error bars" on a plot.

Less obvious is the need to know whether the error is correlated between different measured values. This becomes very important for climate data records: looking at climate change, highly correlated errors are the ones we need to worry about.

To illustrate this, consider a climate data record (CDR) for sea surface temperature (SST). Full resolution satellite data typically measures an instantaneous SST across a pixel of about 1 km. For a typical case, we might have three categories of effect, causing uncertainties of different size.
Data producers tend to put effort into correcting any "biases", but nonetheless, residual uncertainty remains after such corrections are applied.

For a single instantaneously measured SST from a well-designed instrument, the first two effects are the biggest, and may be comparable.

However, for climate change analyses, we may be more interested in how SST over one area and period of time compares with SST for that area at a different time. The larger the spatial scale and longer the period of time considered, the less important noise becomes (the SST errors tend to average down when data are aggregated) and the relatively more important calibration effects become. 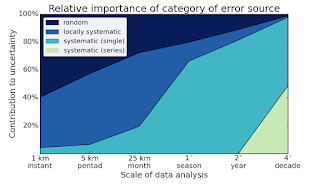 This figure illustrates this effect for a reasonable set of assumptions for the case of SST. In a single 1 km SST retrieval, the random effects may dominate the uncertainty, followed by the locally systematic effects associated with retrieval ambiguity. However, as the scale of analysis of the SST data becomes larger in space and longer in time, first noise and then locally systematic effects become less important. If we are using the CDR across several years, more than one sensor is involved, and not only systematic calibration effects from a single sensor matter, but uncertainty in the (corrected) systematic differences between instruments in the sensor series also begin to matter.

When it comes to creating climate data records, all categories of effect causing uncertainty need to be considered and characterised, as far as practicable. All types of error source are relevant to the applications of at least some CDR users.
Posted by Chris Merchant at 10:20 No comments: