New sea surface temperature (SST) products were generated experimentally by SST CCI in March 2015. These included full resolution data from the Advanced Along Track Scanning Radiometers using a new retrieval method that reduces the noisiness of full resolution SSTs. Although ATSRs are generally relatively low noise sensors, the process of low-bias SST determination amplifies the sensor noise and creates images that look noisy. Noise filtering of the SST could address this cosmetically, but this would degrade the feature resolution and real data quality, and is not satisfactory. Instead, a new theoretical development by SST CCI has been tested: namely, multi-channel smoothing of the atmospheric influence on observed AATSR brightness temperatures. The conditions of the atmosphere vary more slowly with horizontal distance than the SST. The process of SST retrieval can be viewed as estimating the atmospheric influences on brightness temperatures and removing them to reveal the SST that underlies the atmosphere. The new method estimates atmospheric influences across a wider area around a given image pixel, but treats the SST estimation at full resolution. Compared to older methods (left panel of figure), the new SSTs are less noisy (middle panel) — NOT because the SST has been smoothed (it hasn’t), but because the new retrieval method amplifies noise less and gives a more faithful rendering of the true SST variation. 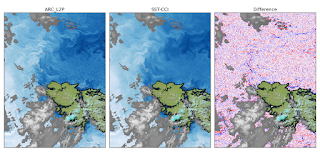 Left: full resolution (1 km) AATSR SST image from previous project. Clouds over the ocean are rendered on a grey scale, and the green feature is land. The rendering of temperature is such that the coolest temperatures are pale blue and warmer temperatures are deep blue. Middle: new result, using new technique to reduce noise amplification in the process of retrieval. Right: noise removed.

The noise removed by the new method compared to old is shown in the right panel. The noise should look completely random, but in fact there are some streaks where there is a tendency to blue or red, indicating non-random effects. This appears to be a result of imperfect co-registration of the forward and nadir views in the older imagery (we have improved the offset correction between the views in the latest experimental products as well).
Posted by Chris Merchant at 06:58 No comments: